"A penny hit by lightning is worth 6 cents!"
―Opie[src]

Barney is convinced that the new, mysterious farmer in town warrants further investigation. Andy finally agrees to pay a visit to the man's farm - and finds himself drawn into a predicament he never imagined he'd find himself in.

Barney become suspicious of Sam Becker, a farmer who pretty much keeps to himself. When Barney's attempts to get a little information out of Sam in town fail, Barney becomes convinced that something shady is going on at the Becker farm. Barney finds that Sam has bought a unusual amount of medical supplies, which makes his imagination run even wilder. Barney eventually gets Andy involved and it turns out that Sam stays so close to home because his wife is expecting. Andy ends up delivering the baby.

Barney: "You know..narrow chin, eyes close together, slack jaw of the prominent overbite."
Andy: "You know who that sounds like?"
Barney: "Who?"
Andy: "You!"

Opie: A penny hit by lightning is worth 6 cents!
Andy "Who told you that?
Opie: Nat Pike told me.
Bee: Oh Nat Pike is always telling Opie the craziest things!
Andy: And you believe him?
Opie: Sure!
Bee: Well I wouldn't put much stock in what Nat Pike tells you.
Opie: Why not?
Bee: Well for one thing, he's only 4 years old!
Opie: He may be young, but he's been around plenty.

Barney: You wouldn't notice a muddy elephant in the snow! 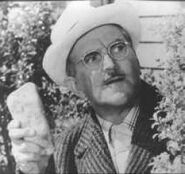 Barney's Posse, Floyd, Nate and Clarence
Add a photo to this gallery

Retrieved from "https://mayberry.fandom.com/wiki/Quiet_Sam?oldid=37365"
Community content is available under CC-BY-SA unless otherwise noted.