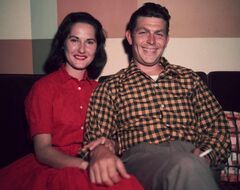 Barbara Griffith was the wife of Andy Griffith during the production of The Andy Griffith Show. She appeared in one episode. They were married from 1949 to 1972 and had two children together.

Add a photo to this gallery
Retrieved from "https://mayberry.fandom.com/wiki/Barbara_Griffith?oldid=34246"
Community content is available under CC-BY-SA unless otherwise noted.