Ellie Walker is a pharmacist (or "lady druggist" as Andy called her) who assists her uncle Fred Walker at Walker's Drugstore in Mayberry. She is played by actress Elinor Donahue in twelve episodes of the first season of The Andy Griffith Show, during which she becomes Andy Taylor's girlfriend. After her appearance in episode The Guitar Player Returns, she inexplicably leaves the series. Ellie makes 12 appearances in the first season. Despite the paucity of her appearances, she was intended as a series regular. Unlike girlfriends that would follow, Elinor Donahue was given opening credit billing alongside Andy Griffith.

In her first appearance[1], Ellie refuses to dispense pills to Emma Brand without authorization. Emma is unable to offer a doctor's prescription and blacklists Ellie. Unknown to Ellie, her uncle regularly placated Emma with a placebo, basically a sugar pill. When Ellie discovers the ploy, she gives Emma the pills she demands. Emma then accepts Ellie into her good graces.

In a later episode, Ellie runs for town council[2] and faces stiff resistance from the menfolk of Mayberry. The men cannot abide the idea of a woman holding a man's position. With a good word from Andy and his backing, the menfolk change their minds and Ellie is elected. In another episode, Ellie introduces a muddy looking farmer's daughter to makeup, perfume, hairdos, and attractive dresses. In the only Christmas episode[3] of the show's run, Ellie and Andy sing "Away in a Manger" with guitar accompaniment. 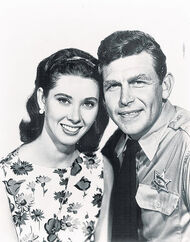 After a short and somewhat turbulent getting acquainted period, Ellie and Mayberry sheriff Andy Taylor date and become steadies. Ellie and Andy are instrumental in bringing Barney and Mayberry townswoman[4], Thelma Lou together as romantic partners. The two couples often double date.

After twelve appearances in the first season, Ellie disappeared with no explanation offered to the audience. Behind the scenes, Donahue decided she and Griffith lacked the chemistry to make their on-screen romantic relationship credible and she decided to leave. Griffith later admitted that it was his own fault. He often had a hard time showing affection on-screen and as a result, the relationship didn't appear real or believable.