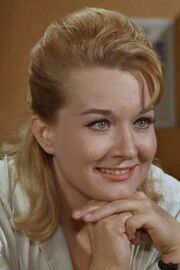 Flora Malherbe is a waitress at the Mayberry Diner and a temporary attendant at Wally's Filling Station who becomes Goober Pyle's girlfriend. She is played by actress Alberta Nelson in three episodes of The Andy Griffith Show. Flora is friendly with nearly all of Mayberry's residents, though she appears to be especially close to Andy Taylor, Howard Sprague, and Emmett Clark in addition to Goober. She strives to always be helpful, though her naivety sometimes complicates matters.

"Eat Your Heart Out" marks Flora's first appearance. Goober tries to impress Flora, but Flora only has eyes for Andy. This creates complications between Andy and Goober and Andy and his girlfriend, Helen Crump, so Andy is eventually able to convince Flora that Goober is a better suited match for her.

Flora demonstrates her helpfulness in "Goober's Replacement" when she volunteers to fill-in for Goober at Wally's Filling Station. The men of Mayberry take very kindly to a pretty gas station attendant and business skyrockets as a result. This leads Wally to offer Flora the job permanently thereby replacing Goober. Flora decides that her relationship with Goober is more important than the enjoyment she gets working at the filling station and ultimately chooses to resign in order to save her relationship with Goober.

In "Emmett's Anniversary", she offers to go to Mt. Pilot with Emmett to purchase a mink coat for Emmett's wife, Martha Clark. She also offers to get Emmett a special discount on the coat from her friend, Bernie. Martha sees Emmett open a car door for Flora and becomes jealous of what she perceives as Emmett's feelings towards Flora. When Andy reveals the reason why Emmett and Flora were traveling together, Martha immediately changes her tune and refers to Flora as a "sweet, sweet girl".

Retrieved from "https://mayberry.fandom.com/wiki/Flora_Malherbe?oldid=37479"
Community content is available under CC-BY-SA unless otherwise noted.