Floyd tries to impress his pen pal Madeline Grayson by posing as a wealthy man.

Floyd tries to impress his pen pal Madeline Grayson by posing as a wealthy man.

Andy is sitting outside Floyd's Barbershop waiting for Floyd to get there, so he can get a haircut before he gets too busy. Andy picks up a letter addressed to a "Floyd Lawson care of Lawson Enterprises.

When he realizes who it is from, Floyd says that it is strictly for tax purposes. The letter is from a Madelyn Grayson, who is a rich widow that Floyd has been "pen-palling" with. She announces very unexpectedly in her next letter that she wants to meet him face-to-face on her way to Florida. Of course, the whole time Floyd has been pretending in his letters to be a wealthy entrepreneur. Upon news of the visit, Floyd threatens to go to Nashville and says that he will be back in a couple of weeks, or maybe not at all. Andy and Aunt Bee reluctantly agree to help Floyd in his masquerade by borrowing a house in town from the Devereaux, who Andy is house-sitting for.

Andy poses as Floyd's son who is home visiting from a Chiropractor Medical School, while Bee is Floyd's "maid." Ms. Grayson arrives and quickly things are on edge. Opie stops by the house and Floyd claims that he is his son, noting that Opie didn't call Andy "Paw", but "Paul". While everybody is in the kitchen, Ms. Grayson invites herself to stay for a week. Floyd realizes he can't go on pretending, but can't bring himself to confess. Andy reveals to Ms. Grayson that he's not Floyd's son at all, but that he is actually the town sheriff. He then tells her as they both know, that sometimes correspondences can be exaggerated, and sometimes people downright lie. Before he can explain about Floyd, Ms. Grayson reveals that she's not a rich widow and that she basically goes around sponging off rich men.

Add a photo to this gallery

Behind the Scenes[edit | edit source] 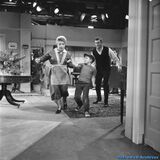 Behind the Scenes
Add a photo to this gallery
Retrieved from "https://mayberry.fandom.com/wiki/Floyd_the_Gay_Deceiver?oldid=43310"
Community content is available under CC-BY-SA unless otherwise noted.