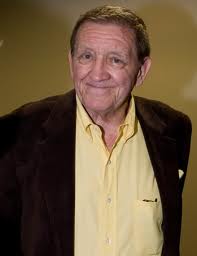 George Lindsey (December 17, 1928 - May 6, 2012) played Goober Pyle on episodes of The Andy Griffith Show, Gomer Pyle U.S.M.C., Mayberry R.F.D. and in the TV movie Return to Mayberry. His film appearances include Ensign Pulver, Take This Job and Shove It, Cannonball Run II (with Don Knotts and Jim Nabors) and the Disney films The Aristocats, Snowball Express, Charley and the Angel, Robin Hood, Treasure of Matacumbe and The Rescuers.

He played Goober on the pilot episode of The New Andy Griffith Show and on a failed pilot called Goober and the Truckers' Paradise. He also made frequent appearances on the TV series "Hee-Haw" dressed as Goober. Leonard Nimoy has stated on a TV Land interview that George Lindsey was originally offered the role of Spock on "Star Trek" and that he turned it down. He appeared in the TV reunion specials Andy Griffith Show Reunion and E! True Hollywood Story: Andy of Mayberry.

George grew up in Jasper, Alabama, the same small town that actress Tallulah Bankhead was from.

Retrieved from "https://mayberry.fandom.com/wiki/George_Lindsey?oldid=34089"
Community content is available under CC-BY-SA unless otherwise noted.