Helen hails from Kansas and attended college in Kansas City. She majored in journalism. Helen takes up residence in Mayberry and is employed as an elementary school teacher. Her uncle, Edward, and her young niece, Cynthia, visit her in Mayberry. Unlike other Mayberry women, Helen has no special skills in the kitchen. She enjoys picnicking, and, in one episode, directs the high school's senior play.[1] An independent, self-sufficient, professional single woman, Helen is a wise and thoughtful character, occasionally displaying a quick temper and a jealous streak, who serves as the voice of reason on the show.

In the third season episode, "Andy Discovers America" (1963), Opie and his classmates take a dislike to their new teacher Helen Crump. The boys complain about her history assignments. After Andy gives Opie some advice about his own experience with school, (which Opie misconstrues into thinking he doesn't have to do his history schoolwork), Helen appears at the courthouse to give Andy a piece of her mind on his interference in her domain. Andy is dumbfounded but finds a way to get the boys excited about their history assignments. Helen is astonished but pleased with the change in Opie and his pals. When she learns Andy played a part in the turnabout, she thanks him and the two become friends. 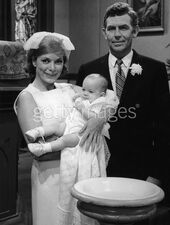 Andy and Helen have many pleasant social outings: they attend dances, picnic at Myers Lake, and double date with others (usually Barney Fife and Thelma Lou). Their relationship, however, is not one of complete sweetness and light. The two have frequent disagreements, sudden jealousies, misunderstandings, and lover's quarrels.

In "Helen, the Authoress", for example, Helen has written a book and uses her evenings to rewrite the manuscript before its publication by a Richmond firm. When she cancels a dinner date with Andy to work on her book, Andy becomes impatient and tells her that he doesn't have to sit home alone. Helen is indignant, of course, and brushes him off. Andy then calls Mavis Neff (a woman reputed to be "rather forward"), and arranges a date with her. When Mavis gets too close, Andy realizes his mistake and apologizes to Helen. She and Andy are married in the first episode of Mayberry R.F.D. and appear with a newborn son, Andrew Jackson Taylor, Jr., in a later episode. She is also in the TV movie Return to Mayberry.

Helen Crump became fast friends with Thelma Lou. Andy, Barney, Helen and Thelma Lou would usually double date, leaving the girls together to gossip and gab together. Usually, when the girls would get upset with Andy and Barney, they relied on each other to get through the predicament.