"Welcome to Mayberry, The Friendly Town!" 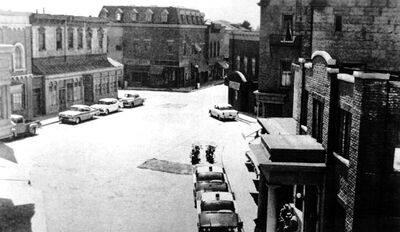 Upon driving into the town of Mayberry, North Carolina, a visitor would have to be enchanted. There is a sign at the Mayberry city limits that reads "Welcome to Mayberry, The Friendly Town." Mayberry is located in the northwestern part of the state and is the county seat of Mayberry County. It was founded by James Merriweather in the year 1864(estimated).[1] Soon after its founding, the town was burnt down in 1870 by "Rotten" Ray Ancrum which later established the Ancrum Charcoal Company.[2] The elevation of the town is 671 feet, and its population was a little less than 2,000 at the beginning of the 1960s. According to the statistics on a sign at the train depot, the population rose to 5,360 by the mid-1960s. Mayberry is a beautiful place. Because of the abundance of lovely flower gardens, Mayberry has earned the nickname the "Garden City of the State." The Garden Club sponsors an annual flower show, with competition in gladiola, snapdragon, pansy, and rose divisions.[3] A notable town landmark is The Old Oak Tree in the middle of town.[4] On the town square, there is a cannon (with the initials T.R. scratched on it- the handiwork of Tracy Rupert, not Teddy Roosevelt) whose muzzle was busted after it misfired on the Fourth of July.[5] Near the center of town is the David Mendelbright Memorial Horse Water Trough ("Let no horse go thirsty here," 1870-1933).[6] And, of course, all the folks in Mayberry can point out the old Rimshaw House, a haunted house where Old Man Rimshaw is rumored to have killed his hired hand with an ax.[7]