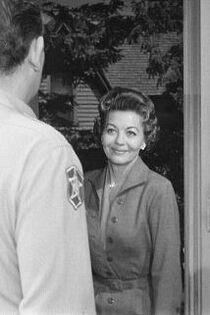 Nellie is a Mayberry citizen seen in at least 34 episodes of The Andy Griffith Show. In Andy Saves Barney's Morale, Andy Taylor says to her, "Nice dress, Nellie". In A Wife for Andy, it is possible that her voice is heard saying, "I wish I knew" in respose to the line, "I wonder what this is about." The actress has never been identified.

Retrieved from "https://mayberry.fandom.com/wiki/Nellie?oldid=42515"
Community content is available under CC-BY-SA unless otherwise noted.