Opie has a crush on his teacher Helen Crump and buys her a pair of stockings.

Opie has a crush on his teacher Helen Crump and buys her a pair of stockings.

Opie has a crush on a new girl and asks his Dad for advice on how he should tell her he likes her. Andy says that often the other party will know just by the way you act around her so he shouldn't do too much out of the ordinary. Opie decides to buy her a gift but when Andy discovers he has bought her nylon stockings from Miss Primrose, he suggests that's just a bit too personal and should return then. Opie then approaches Barney for advice on what he should say to his new girl and the Deputy recommends reading poetry to her. He's aghast, however - and has to tell Andy - when he realizes that the object of the boy's attention is his teacher, Helen Crump.

Andy: Miss Crump is a fine person – just a fine person – and I can understand you likin' her a lot.
Opie: Yes.
Andy: But, Opie, the, uh, the truth of the matter is: Miss Crump is a little more in line with my age. As a matter of fact, she's my girl. You're kinda steppin' into my territory. Well, that's right. She's my girl – like Sharon McCall was your girl.
Opie: Gee, Pa, I didn't know that.
Andy: I know you didn't, son.
Opie: Well, I won't do anything to break it up. If she's your girl, I just won't call her anymore.
Andy: Well, thanks.
Opie: You mean you and Miss Crump might get married someday?
Andy: Oh, I don't know. We, we might.
Opie: Gee, Pa, that's swell. As long as she's in the family, I don't care if she's my wife or my mother.


Opie: “Mrs. Primrose said any lady would like em’.”
Andy: “Well… sure. But you got to know a person real well before you give em’ anything like that, and you got to be older. See, stockings is personal, very personal. You understand?"
Opie: “No.”
Andy: “Well umm, suppose you were to give this young lady some candy or flowers, that would be OK. You know what I mean?"
Opie: “No Pa’.”
Andy: “Opie Umm…stockings is something a lady wears.” 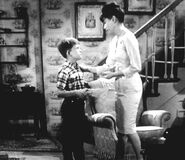 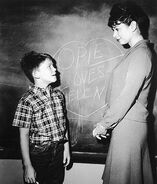