"If she goes, what'll happen to her? She can't do anything...play ball, catch fish or frogs. She'll be helpless! That's why she's gotta stay, so I can teach them to her!"
―Opie about Aunt Bee 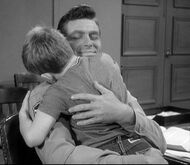 Opie's relationship with his "Pa", Andy, provides plot material for many episodes. In one episode (Opie the Birdman, September 30, 1963), Andy teaches Opie the value of responsibility and parenthood after Opie accidentally kills a mother bird with his slingshot and leaves her three nestlings orphaned. Naming the birds "Wynken, Blynken, and Nod", Opie nurtures them until they are ready to be released into the wild.

Andy sometimes misjudges Opie, suspecting him of being selfish and oblivious to the needs of the less fortunate. Andy then often discovers, to his chagrin, that Opie had been self-sacrificing and generous. For example, in one episode, Opie forfeits a grocery store delivery job to allow a boy with an ill father to replace him. In another episode, Opie uses his savings to buy a friend a winter coat after Andy lambastes him for contributing only three cents to a charity.

When not visiting his father at the courthouse, Opie sometimes gets into jams. Some of his juvenile misdeeds include: trespassing in a neighbor's barn; selling Miracle Salve to the citizens of Mayberry; accidentally destroying Aunt Bee's prize rose; concealing an abandoned baby in his clubhouse; tricking Goober Pyle into thinking a shaggy dog can speak, and starting his own tell-all community newspaper The Mayberry Sun.

Opie's best friend through the black-and-white run is Johnny Paul Jason; in color episodes, it is Arnold Bailey, who is the doctor's son. He also has several other friends during his childhood including Howie Pruitt. In one episode, Opie's new friend Trey Bowden provokes Opie's jealousy when Andy takes a liking to Trey and invites him along on outings. Other new friends sometimes prove unworthy. One friend, Arnold Winkler, for instance, encourages Opie to throw tantrums at home to get his way.

In another episode, Opie joins a secret club and is made keeper of the club's special candle. The club trespasses in a barn and, when the barn later burns to the ground, Opie is blamed. In the color episodes, Opie's best friend is Arnold Bailey, but in one color episode, Opie befriends a boy who plays a mean trick on Goober. Both boys are taken to task by Andy for their mischief-making. Opie respects and is friendly to adults in Mayberry. He spends time at the filling station hanging out with Goober, and the two often share their comic books.

Opie has several girlfriends including, in his boyhood, Karen Burgess and, in his teens, Mary Alice Carter. He also develops crushes on Barney Fife's sweetheart Thelma Lou and on his father's sweetheart (and Opie's teacher) Helen Crump.

During his teens, Opie has a few jobs around Mayberry. He works in the drug store, and, in another episode, works as a delivery boy at the grocery store.[1] He also plays in a rock band with his friends and has a paying gig at a teen party. In a later color episode, Opie makes college plans with dentistry as his career choice.

Opie's mother is mentioned only once in the series. In Wedding Bells for Aunt Bee, Andy tells Opie he had a love for the boy's mother similar to the love Aunt Bee feels for her beau. Other than this one mention, Opie's mother is non-existent on the show. There are no photographs of her in the house or other souvenirs, and no one mentions a grave. She apparently has no relatives in Mayberry such as parents or siblings as Opie never mentions grandparents or aunts and uncles except those on his paternal side. In the backdoor pilot episode from The Danny Thomas Show, viewers learn Andy lost Opie's mother when the boy was "the least little speck of a baby."

Either budgets were tight or Opie just loved this orange plaid shirt in the 8th season.

In the 1986 made-for-TV reunion movie Return to Mayberry, Ron Howard reprises his role as a now-adult Opie. The plot was driven by his father's return to see Opie's wife Eunice Taylor give birth to their first child.