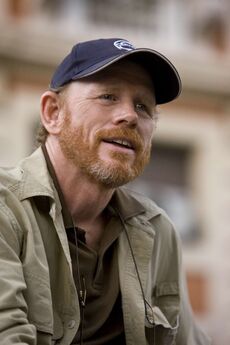 As a child actor, he appeared in the films Five Minutes to Live, The Music Man and The Courtship of Eddie's Father, and had recurring roles on the TV series "Dennis the Menace" and "The Smith Family", The Many Loves of Dobie Gillis,,the highly popular TLassie Show. He has been nominated for five Golden Globes, including one for playing Richie Cunningham on the TV series "Happy Days". He also starred in the films American Graffiti, The Shootist, Grand Theft Auto, More American Graffiti, and Osmosis Jones. Ron Howard has become a noted director of such films as Grand Theft Auto, Night Shift, Splash,,Cocoon, Gung Ho, Willow, Parenthood, Backdraft, Far and Away, The Paper, Apollo 13, Ransom, EdTV, How the Grinch Stole Christmas, A Beautiful Mind (for which he won two Academy Awards for producing and directing), The Missing, Cinderella Man, The Da Vinci Code, Frost/Nixon (with two more Oscar nominations), Angels & Demons, The Dilemma, Rush, In the Heart of the Sea, Inferno and Solo: A Star Wars Story. He was awarded a star on the Walk of Fame and he has also won two of his six Emmy nominations for producing TV shows such as: "From the Earth to the Moon" starring the Two Time Oscar winner, Tom Hanks and He has won one Golden Globe for "Arrested Development" for which he also serves as The Narrator.

His father Rance Howard and brother Clint Howard each appeared in episodes of "The Andy Griffith Show" and have appeared in many of Ron Howard's films. His mother Jean Speegle Howard and wife Cheryl Howard have appeared in several of his films. The film How the Grinch Stole Christmas was dedicated to his mother's memory. His daughter Bryce Dallas Howard has become a noted film actress, whose first three films were directed by her father.

He is the coauthor of the 2021 book "The Boys: A Memoir of Hollywood and Family" with his brother, Clint Howard.

Image of Ron and Andy. Posted by Ron via his Facebook page