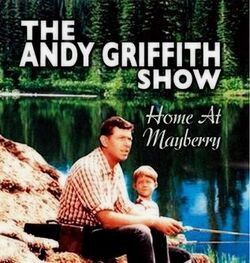 The Andy Griffith Show is a syndicated family situation comedy series created by Sheldon Leonard and Aaron Ruben, which was broadcast on CBS for eight seasons from 1960 to 1968. Episodes involve Sheriff Andy Taylor (played by Andy Griffith) and his family and friends' life in a small rural town called Mayberry, North Carolina. 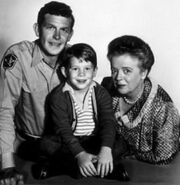 Andy Taylor is a widower raising a young son, Opie, with the help of his Aunt Bee. The Sheriff's only employee at the Court House is Deputy Barney Fife. Andy's girlfriend is Opie's schoolteacher, Helen Crump. Thelma Lou is Barney's main squeeze. Gas station attendant Gomer Pyle was one of the stars of the spinoff series Gomer Pyle U.S.M.C. After The Andy Griffith Show was canceled, it was replaced by Mayberry R.F.D., a series about a widowed farmer named Sam Jones who had been introduced at the end of the eighth season, by winning a seat on the City Council. The Andy Griffith Show is itself a spinoff series from Make Room for Daddy starring Danny Thomas. The series received Emmy Award nominations for Outstanding Program Achievement in the Field of Humor (1961 and 1962) and for Outstanding Comedy Series (1967). In 1986 the cast was reunited for a television movie called Return to Mayberry, which aired on NBC. Aunt Bee once remarked that Andy single-handedly runs the town, and was always trying to help those in need.

In order to gauge audience response for their upcoming TV series "The Andy Griffith Show," executive producers Sheldon Leonard and Danny Thomas presented a pilot episode on Thomas' own weekly sitcom. This episode, in the seventh season of "Make Room for Daddy," was the launching pad for one of the most popular television series of all time. While traveling with his family, Danny has an encounter with small-town law enforcement in the form of Sheriff Andy Taylor. This episode would serve as the pilot for "The Andy Griffith Show" and was first aired on February 15, 1960.

Initially, Griffith played Taylor as a heavy-handed country bumpkin, grinning from ear to ear and speaking in a hesitant, frantic manner. The style recalled that used in the delivery of his popular monologues such as "What it Was, Was Football". He gradually abandoned the 'rustic Taylor' and developed a serious and thoughtful characterization. Producer Aaron Ruben recalled:
"He was being that marvelously funny character from No Time for Sergeants, Will Stockdale [a role Griffith played on stage and in film]...One day he said, 'My God, I just realized that I'm the straight man. I'm playing straight to all these kooks around me.' He didn't like himself [in first yea- reruns]...and in the next season he changed, becoming this Lincolnesque character."
As Griffith stopped portraying some of the sheriffs more unsophisticated character traits and mannerisms, it was impossible for him to create his own problems and troubles in the manner of other central sitcom characters such as Lucy in I Love Lucy or Archie Bunker in All in the Family, whose problems were the result of their temperaments, philosophies and, attitudes. Consequently, the characters around Taylor were employed to create the problems and troubles, with rock-solid Taylor stepping in as problem solver, mediator, adviser, disciplinarian and, counselor. Aunt Bee, for example, was given several wayward romances requiring Andy's intervention, Opie suffered childhood missteps that needed a father's counsel and discipline, and Barney engaged in ill-considered acts on the job that required Sheriff Taylor's professional oversight and reprimand.
Andy Griffith has also said that he realized during the earlier episodes of the program that it was much funnier for him to play the straight man to Knotts' "Barney," rather than his being the originator of the comedic scenes between them.

The show comprises 8 full seasons and 249 episodes— 159 episodes in black and white (seasons 1–5) and 90 in color (seasons 6–8). Griffith appears in all 249 episodes with Howard coming in second at 209. Only Griffith, Howard, Bavier, Knotts, and Hope Summers appeared in all eight seasons.

Don Knotts left the show at the end of the fifth season to pursue a career in films (on the show it is told that he takes a job as a detective in Raleigh) but returned to make five guest appearances as Barney in seasons six through eight. His last appearance in the final season in a story about a summit meeting with Russian dignitaries "ranked eleventh among single comedy programs most-watched in television between 1960 to [1984], with an audience of thirty-three and a half million." The color episodes of the show in its later years are markedly different from the black-and-white episodes of the first five seasons. New writers took over the scriptwriting for the post-Knotts color seasons, and they generally abandoned the character-based sitcom format in favor of dry humor revolving around rather mundane aspects of life in a small town.

Meet the people of Mayberry[] 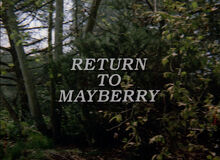 In 1964, daytime reruns began airing and the show was retitled Andy of Mayberry to distinguish the repeat episodes from the then-new episodes airing in primetime; this alternate title continued to turn up in syndication over the ensuing decades. Reruns continue to occasionally be seen on local television stations to this day, and its 50 years (as of 2014) in syndication has proven to be exceptionally long; most syndication series, in comparison, rarely last more than ten years in syndication, if that. In addition, TV Land currently holds cable television rights.

At the end of the show's fourth season (May 1964), the backdoor pilot "Gomer Pyle, U.S.M.C." aired, and, the following September, the spinoff series Gomer Pyle U.S.M.C. debuted with Jim Nabors in his Gomer role and Frank Sutton as drill instructor Sergeant Vince Carter.

In the last episodes of The Andy Griffith Show, the character Sam Jones, played by Ken Berry, was introduced and a sequel series, Mayberry R.F.D., was fashioned around him for the fall of 1968 (in essence replacing Andy Griffith — the '68 season would be his last). Several performers reprise their original roles in the sequel, with Bavier becoming Sam's housekeeper.

To create a smooth transition from the original series to Mayberry, Andy and Helen were married in the first episode, remained for a few additional episodes, and then left the show, with a move to Raleigh being the explanation given the audience. After the sequel series' cancellation in 1971, George Lindsey played a Goober-like character over several years on the popular variety show Hee Haw.

In 1986, the reunion telemovie Return to Mayberry was broadcast with several cast members reprising their original roles. Absent, however, was Frances Bavier. She was living in Siler City, North Carolina in ill health, and declined to participate. In the telemovie, Aunt Bee is portrayed as deceased (and in fact Bavier did die three years later), with Andy visiting her grave.

Two cast reunions of the show were subsequently filmed and aired on CBS in 1993 and 2003.

An endearing quality of the show was its various catchphrases used repeatedly as running gags. They include: 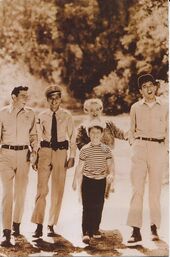